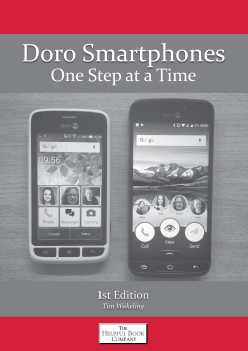 After all, it can still be confusing, frustrating or even downright maddening.

Even with a Doro, you could still end up pulling your hair out… or just stuck wondering “How do I do such and such?”

But I can’t print what some people replied when I told them that!

Well, I’m not immune to flattery… and besides, when literally hundreds of people have rung up asking for something, it makes me feel I really ought to do it!

Everything’s explained nice and simply, in plain English. There are lots of pictures of the screen showing you exactly what to do… everything to make using your Doro as simple and easy as possible.

What’s covered?  Well, amongst other things:

Lots more, of course. I can’t fit it all in here. But don’t be put off by how much there is – you don’t have to use it all, and it’s all explained nice and simply. You can take your time and pick the bits that interest you most… and always come back to it later on when you want to do something new.

Who’s it suitable for?

That’s only half the story
It’s not just about knowing how to use the phone itself. To do most of the really handy things it can do for you, you need to use an App of some kind.

There are thousands and thousands of apps out there that let your phone do all sorts of things. Many are even free.

If you have a tablet you might have used various apps before – but on a phone they tend to work differently, mainly because of the smaller screen.

Get More From Your Smartphone: 81 free apps that mean your phone can of all sorts of things
It’s an 82 page book covering the apps that I think you might find useful. The main types of app that are worth knowing about. It tells you what’s out there, how to get hold of it and then, how to use it! Most importantly it shows you why you’d want to use it.

For example (which of these might be helpful to you?):

And lots more, from using your phone as a sat-nav to using it to translate signs you see on holiday to apps that help you lose weight or get fit. All explained step by step.

So how much are the books?
Most Doro phones cost around £200 – plus you pay for the ability to actually make calls and so on.

But you’ll be glad to know these books don’t cost anything like that. Each book is just £12.97 and there’s only one lot of P&P of £2.99, no matter how many books you order.

But don’t take my word for it – All you need to do is say “maybe”
Order a free trial set now and you don’t have to pay a penny until you’ve got the books and decided you’re happy with them. Otherwise send them back to us and owe nothing.

Best decide now… or actually, why not decide once you’ve seen them?
Make using your phone as easy as it should be. And find out what you might be missing out on that it could do for you. Why not get a free trial set now? If you’re not happy, you can send it back and pay nothing.

Don’t put it off and risk forgetting. Just click here and give us your name and address so we know where to post the book.

We’ll get your books in the post straight away.