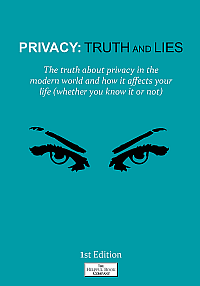 two more things I should say…

I should mention that we also published another book at the same time: it’s a fully updated second edition of a book we did 6 years ago that was hugely popular at the time, all about scams, swizzes and tricks that could be costing you (It’s called “They’re Out to Pocket Your Money”.)

And the second thing I should say is that if you order the Privacy book now, we’ll also include a copy of “GDPR 2018 – what is it and what does it mean for me?”.  It’s worth knowing about this, but most of what you read in the papers or see on TV is either confusing, full of confusing jargon or just plain wrong.  This little guide goes through what actually matters to normal people about it all.  And it’s free when you order the privacy book.

Best act now – today
Best put your free-trial order in now, while you think of it. Just do it online here (no need to put credit card info in as you don’t have to pay until you’ve decided you’re happy with the books) or call 01229 777606 and ask Emma, Jess or Michelle (or one of the rest of us if the phones are especially busy) for a copy of the Privacy book. Or if you like email [email protected] with your name and address saying you’d like a copy of it.

We’ll get your copy in the post to you as soon as it arrives in stock from the printing company and you can take back control of your own privacy.