Sorry – this offer is now finished.  If you’re interested in the course, best make sure you’re joined up to my newsletter and you’ll hear if and when we open the doors again.

You can join the newsletter at www.helpfulbooks.co.uk

If you use a tablet, whether it’s an Apple iPad or one of the many Android tablets, I guess you might agree with two things I have to say: 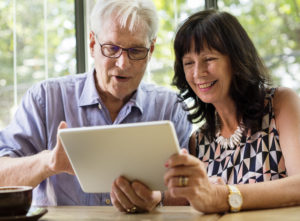 Using your tablet – frustrating no longer?

The first thing: It can be frustrating.  Sometimes hard to work out how to do things… or things randomly work sometimes and not others… which can get you into a right pickle and drive you absolutely mad!

It makes you want to pull your hair out… or even want to chuck it out of the window (the iPad or Android tablet, that is, not your hair!)

BUT the second thing is: it can be amazing.  The things you can do with it are mind-boggling.

Things like sending an email halfway round the world in minutes… browsing world news as it happens whilst stretched out on the sofa… or when I use it to let Mum and Dad wave night-night to my little boys when I put them to bed (the boys, that is, not Mum and Dad).

And you might not even know all of the things it could do for you… I don’t mean the fancy techie stuff… there might be all sorts of things you’d love it to do for you, if only you knew it could… and how.

But the problem is it’s not always easy to work out how it all works.  As you may well have experienced, you can get into a right pickle… and every time you try to make it right again, it only gets worse.

Which is why I’m announcing something that I think could help.

You see, we’ve written books about using tablets.  And they’ve been very popular – thousands and thousands of people have used them to help them get to grips with their tablets… and we’ve had stacks and stacks of letters and emails (and even phone calls) saying how much they’ve helped.

Now, I like books.  I always have. But it’s not the same as being there.

We’ve also recorded DVDs showing people how to do things on tablets.  They’ve been popular as well… but there’s also an advantage in having things written down, too.

I’ve always wished we could do something that has the advantages of both.

Which is where our newly-updated course Tablets Made Simple… and how to get the most out of them comes in.

It’s an online course – but not a formal course like you do at a college or University or whatever.  You won’t get told to sit up straight or be quiet at the back!

You read a bit of writing, then watch a bit of video.  Instead of having long reams of text to plough through, or a long video, where it can be hard to take it all in, it’s broken up into little “bite sized” bits.

Short, easy to understand bits of writing followed by short (typically 5-10 minutes or so) videos showing you how to do something (you watch our tablet screen as we show you) and videos where we explain what the point of a particular thing is or what it’s really for.

And the way that you read about something, then see it demonstrated helps to make it easier to remember than only reading or only watching.

Explained simply… as you watch and SEE how to do it…

All of it explains things simply, in plain simple English, not complicated jargon.  It goes at a sensible speed. You can see exactly what you need to do – we show you, then you try it out yourself… and since you’re in control, you can come back and watch it again if it didn’t quite sink in first time.

There are also practice activities for you to try out, and a few short quizzes… not like school, where you have to worry about passing a test or anything like that!  Just a few questions to help you make sure you understood it.

Go over any tricky bits as many times as you like

Of course, if you didn’t understand a particular bit, you can go back and watch those videos or read those bits of writing again – as many times as you like.

As I say, I’m a big fan of books.  But I’ve used courses that work like this

myself – and I’ve found it much easier to learn everything (and remember it later on) this way, rather than by only watching a video or reading a book.  It somehow sinks in better.

So what’s covered? Well, I can’t list everything here, but it’s all the things you’re likely to want to know about using tablets (iPads and Android ones) – to make it as easy as possible.

That’s not all, of course.  I can’t list everything here.  But don’t be put off if that sounds a lot.  It really is made as simple as possible. And if there are particular bits you aren’t bothered about learning, you can simply skip them – you can always come back later on if you want to know about them.

You can come back to any other bits, too, if you want to go over them again – as many times as you want.

Oh, and I should mention.  Because the course is online, you can access it instantly once you’ve joined – no waiting around for the post to arrive.  In a minute or two from now you could be watching the first video, reading the first part…

Who’s it suitable for?

So how much does it cost?

I have to admit, when I first came up with the idea I had no idea how much a course like this should cost!

I mean, I knew it’s not cheap to make it (the software to make the course cost $999 – and that’s just to turn the writing and videos into a course, let alone record the videos, edit them, put the graphics together and so on).

So I had a look around at what else was out there.  I started with the Open University. They do a course called “Introduction to computing & IT 1” –

admittedly it’s a bit different as it gives you an actual formal qualification and you have assignments you have to do and hand in… and worry about passing! Anyway, that costs £1464 – and I knew I didn’t want to charge that much, you’ll be glad to hear…

So I looked for less formal courses.  Most were aimed at people in businesses – and as you can imagine, they were pretty pricey, too.  I only found one that was a little bit similar, though to get access to it you had to pay a fee that amounts to £190.20 a year – ouch!

Still more than I wanted to charge…

If you prefer you can pay in instalments – three monthly instalments of £20.40.  Up to you – whichever you prefer. You get exactly the same course either way.

Free Bonus course: What to do when it goes wrong

I mentioned that three of us worked on the course together.  But somehow, while we were doing that, Julie managed to fit in some time to work on something else she had an idea for – a much shorter course called “What to do when it goes wrong, won’t do what you expect or simply decides to have a sulk”… or just “What to do when it goes wrong” for short.

It covers the things that go wrong… and what to do when they happen…  including the ever-popular “What to do if (when!) it crashes” as well as “the internet isn’t working”… “the battery runs out too quickly”… and “Problems with the screen”.

The real-life issues that people actually have, solved, in plain simple step by step instructions.  You might not need this stuff on day one – but when you do, you’ll be very glad you have it!

And if you join the Tablets Made Simple course you’ll get access to this course of Julie’s completely free as a sort of bonus for giving it a try.

You might find this worth the money on its own if you ever have any of the problems it covers… now they simply won’t be a problem for you any more as you’ll know exactly what to do to sort them.

Secondly, you should know about the 12 month money back Guarantee

I don’t want anyone to be unhappy with this course.  Frankly, if you want to make using your tablet easier, or know how to get more out of it, then I think you’ll find this is exactly what you want.

But just in case I’m wrong, I don’t want you unhappy with the course.

So if at any time in the 12 months after you join the course you decide you’re not happy with it, contact us (phone or email is best but anything short of a carrier pigeon will do) and we’ll refund you in full.

I mean it – at any point within 12 months after you join, if you decide it’s not for you, just let us know and we’ll refund you.  No quibbles, no awkward claim forms… just let us know who you are so we refund the right person!

I want you to know that you’re taking no risk in joining the course – if you don’t think it was worth it you get all your money back.

A few more important details about the course:

One more thing I must mention: Doors slam shut on Friday 4th March

We originally launched the course back in 2019.  It was hugely popular – but we only opened enrolment for three weeks – then we closed the doors.

But now, by popular demand, we’re opening the doors again – but again, just for a few weeks.

At 5pm on Friday 4th March, the doors shut and if you haven’t joined by then, you won’t be able to – at least for now.

But if you haven’t joined by then, you’ll miss out.  We might open the course again in the future… but I can’t promise it.

(If you’re wondering, yes, we have updated the course for changes to iPads and Android tablets – and if you already joined the Tablets course when it first opened, you don’t need to join again – you’ll get all the updates automatically.)

Best do it now

So if you’re thinking about it, it’s best to join now (you don’t have to start going through it straight away, just join it now) even if you’re umming and ahhing about it.  After all, if it turns out you’re not happy with it for some reason at any point in the next 12 months you can get your money back, so you’re not risking anything.

After all, you’ve nothing to lose… apart from the frustration at using your tablet!

Why not do it now, while it’s on your mind?  Within a few minutes you’ll have access to the course and you’ll be able to start straight away… or save it for later (whichever you prefer)

Don’t forget, if you join the course and find you aren’t happy with it at any point in the first 12 months, you can get your money back – every penny.

There’s no risk in joining – and I think you’ll find it’s exactly what you need to get the hang of using your tablet… and get the most out of it – you might find things you’re really glad to know that you didn’t even know you could do!

Don't miss out: Click here to get into the course